My friend Carl Bolm has had both Eric Greitens and Robert O’Neil, U.S. Navy SEALs in his home multiple times. Robert O’Neil was the SEAL that actually killed Osama Bin Laden.

I have read books about both of them. Here is a little more info on Robert O’Neil.

SEALs train super hard and all want to be the “door kicker” rather than “in the rear with the gear” logistics guys. Yet, that is sometimes their fate too.

However, they train so hard to lead the way and cannot wait to get into action, rather than prepare and train all of the time. They are operators that want to put it all on the line and test themselves for real…no matter the risks or consequences.

The Bin Laden raid was practiced more than 100 times in extreme detail and with many varied contingency plans practiced too. When during the actual mission they crashed and lost one of the helicopters inside the Bin Laden compound nobody was injured and this had been anticipated and rehearsed so many times that they lost no time whatsoever, and the mission continued instantly. That is awesome to be that trained and prepared for any negative aspect and instantly adapt and overcome.

This mission required two slow moving helicopters to clandestinely enter the sovereign airspace of Pakistan for an hour without being shot down, then attack a structure that could possibly be the hideout of Osama, the leader of Al Qaida and most wanted man on earth by the U.S.

They figured that if Bin Laden was actually there, that he likely would be wearing a suicide vest and the house would be rigged to blow up if he was compromised for the ultimate in security and so that he would not be captured…everyone would die. Then even if you pull off the actual attack, escaping Pakistan and not being killed by his security forces then the Pakistan military was likely to “neutralize” them.

The SEALs that went understood that their return was very unlikely and considered this a “one way mission” but no matter, the potential value was  justified, completely worth it, and they were literally all willing to sacrifice themselves if they could get a shot at OBL.

The story goes that one SEAL asked Robert O’Neil the following question an hour before they set off. “You absolutely know that I am going with you and I am all in, no matter what, but tell me again, why are we doing this?”

O’Neil replied, “We are doing this for that mom who dropped off her kids at school one morning and then went to work. An hour later she jumped from the 96th floor of the World Trade Center, and as her last act of human decency, held her skirt down to hide her underwear on her way to death…that is why we are going”.

America has great men like these guys and I am so proud to even think that we still have guys like this compared to today’s general modern society that chronically whines and complains for any perceived injustice or discomfort. These guys are truly special and you only need to meet them to know they are truly superlative people. I will always appreciate and support the U.S. Navy SEALs.

Carl has had quite a bit of contact with Robert O’Neil and that is just so damn cool to me. Imagine knowing the guy that actually created such history. 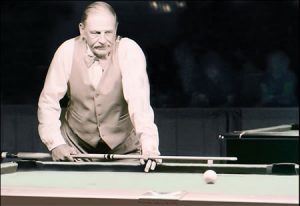 When I was 21 years old and had been training for a couple of years with Jerry Briesath, it was truly a magical time in my pool development. The teaching

PUSH OUT THE PUSH OUT RULE

The push out after the break rule in 9-ball is a dinosaur of a rule that needs to be eliminated as the intention is no longer justified. Originally it was