Dave was a hardcore good pool player who played all games, he loved action, he was very humorous, and had a genuine smile. We got along well, as Dave knew of many money games for me. Together we generated a decent living for more than a year.

California Dave Piona and I became good friends while playing pro tournaments despite seemingly being kind of an odd pairing on first glance. His enthusiasm, laughter, and love of good times with a positive daily outlook, was a refreshing change from most pool players. Dave did like to smoke weed and always reminded me of Cheech Marin, of Cheech and Chong. 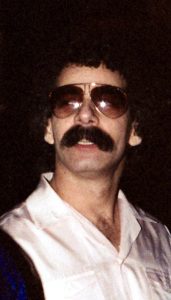 We traveled together a lot through Texas in 1979 as we both had apartments and operated out of Houston where the action was always vigorous when we were home. Dave was a journeyman road player and I was a young straight shooter with modest experience.

I had serious monetary value to Dave and he had mutual value to me, because he knew the places and the guys that he had previously won against, and they would play me. He infiltrated me into many places without going in, but provided a full briefing on how to proceed and what to expect. Dave would later return upon my phone call to pick me up after the games were over.

One time in Dallas, Dave dropped me off at a roadside tavern that had previously been a 1960’s era drive up Root Beer Stand. They had four bar pool tables one of which was a 3’x6′ table and the guy that I was instructed to play loved to bet $50 a game and later much higher once he felt more comfortable, but he always insisted on playing on that 3’x6′ table.

He knew the idiosyncrasies and nuances of this table that played horrible and would require some serious trial and errors for all adversaries. This allowed the guy to feel competitive despite being short on true skills.

During this time, the place had about 15 customers and two bartenders. I was concentrating on trying to play better when a big argument happened at the bar between a bartender and another customer that quickly became quite loud and distracting.

This drew a little of my attention because the argument escalated into a heated rage when the customer said, “I’m going to the truck and get my gun” and the bartender said, “just go ahead”.

I found this deeply concerning because the voices seemed genuine and sincere regarding things now “going nuclear”. The guy loudly slammed the door on his way out and both bartenders went to a drawer and withdrew long-barreled hand guns.

The place had a few windows and both bartenders pinned themselves to the inner walls while maneuvering for an angle on the door. I was still playing in the middle of the room and had become a likely innocent candidate for crossfire perforations if shots were traded. This was extremely uncomfortable for me because I did not want to quit my good pool game but also did not want to be a victim. I made a plan that if shots were traded that I would crawl under the pool table and hope for the best. I wanted to exit, but was fearful of leaving the place and being mistakenly shot and listed as KIA, a war casualty, or as collateral damage, in the hall of pool history.

Also concerning to me, was that the rest of the customers casually continued drunkenly conversing at the bar unaffected and disinterested as if this was a familiar occurrence.

Finally the police arrived and things settled back down and our pool game continued, I finally did win but was aggravated with Dave for knowingly exposing me to such a risky environment.

Mentally this is quite a challenge. The challenge comes from being surrounded by people who are only able to judge results of the object ball finding the pocket or not.